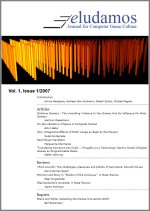 Abstract:
War games often try to simulate the characteristics of real weapons – their range, loading times and the bullets’ caliber in order to create an authentic image of war. What they do not show is its authentic violence. Usually we do not see blood pixels and splatter orgies as in dungeon games in which the player has to fight monsters and zombies with eg. magic swords. Instead pictures of a clean war are presented in which civilians hardly ever appear and every weapon hits the target remote-controlled. Because of the simulation’s naturalism gamers may believe that a genuine war looks like the one the screen – and, in fact, today’s soldiers are not faced with the ‘white in the eye of the enemy’ any longer what they do see are symbols on the radar or abstract objects on a computer screen. Accordingly, the real war more and more looks like a computer game while the computer game increasingly looks like reality.

Among the currently most popular war game genres are World War 2 games. They met their renaissance with the 1998 release of Stephen Spielberg’s Hollywood movie “Saving Private Ryan”. The film starts with an impressive staging of the battle following the landing at Omaha Beach in 1944 and subsequently a number of WW2 games were published in which gamers could re-enact the battle over and over on the internet. The respective gamers are organised in so called clans which often refer to historical divisions of Allied forces or German troops. Some of them even play under the names of well-known SS divisions such as “Leibstandarte Adolf Hitler”.

Most of the other gamers in this community do not seem to object to SS-clans who argue that they were only re-enacting their idols’ campaigns and did not share their biologist and racist world view. Thus, they try to promote the image of the bravely fighting SS-soldier in disregard of the war crimes committed by the Waffen-SS. Such arguments resemble the patterns used in speeches of the German Neo-Nazi party NPD.
In my article, I will analyse popular war games and the way they try to advance the image of the brave soldier and a intriguing weapon technology while neglecting the effects of violence and atrocities and how these games do not appear in the daily discussion about violence and are mostly elided by the protection of minors.

Contents:
Introduction
The Non-Violence of the War Machinery
Virtual Reenactment
Evolution of the Soldier Image

This entry was posted in Article. Bookmark the permalink.