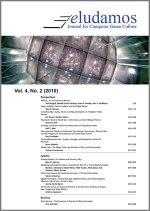 Abstract:
This article identifies and interrogates a primary design principle that exists across digital game genres and formats, articulated as ludicity. The article uses specific examples across videogame genres to communicate a spectrum of ludicity with two opposing poles, hyper-ludicity and contra-ludicity. Hyper-ludicity describes instances where the game mechanics inflate, expand, or enable the player to perform actions either beyond their usual effectance, providing a sense of empowerment, or provide new actions previously outside the boundaries of the game mechanics. Contra-ludicity is the opposing principle, where the game mechanics deflate, contract, or disempower the player, where tried and tested mechanics become less effective or have no effect at all, and in some instances where entire mechanics are wholly removed from the system. Though this would seem contrary to the pleasure of play, this article investigates how this design principle also maintains its own form of pleasure.

This entry was posted in Article and tagged game design, Ludicity. Bookmark the permalink.