Welcome to the Games Research Resource Center. This site is the result of my own journey through all the games research material that I encountered during my games research. Hopefully this will be a portal towards many of the interesting games research stuff that is out there on the web.

Vesper.5, a game that makes you think.

I am now twenty turns into the game Vesper.5 (Brough, 2012) in which you can only make one move every day. The concept is rather interesting and adheres to mechanics like daily quests in MMO’s or the waiting time in Facebook and other social network games and makes you wonder about how important progression is. There is a certain duality present in the game. On the one hand it is frustrating that you can only move one step every day and the only thing left after that is looking at your lazy ass avatar that sat down in its place and listening to the background sound. On the other hand, the next step takes only a few seconds to perform every day and therefore playing it does not impede your daily schedule very much. You can just move a step and then close the game. It kind of works like an advent calendar where you get to open up a new number every day. The only thing that differs here is that the end is not (yet) revealed or visible. The only screen visible is the one with your avatar in the middle and if you move enough steps the screen will scroll, keeping your avatar centered.

The duality between playing and not playing also mocks whether or not this is actually a game. In a sense it might even be more of a game about gaming than a game itself. It adheres to the compulsive sense of seeing things through to the end and the addictiveness of play itself. Regular players often report thinking about their games during the times that they are away from it, thinking about how to tackle a possible problem or thinking of a new strategy to try. This game mocks that feeling, because it both asks you to come back and give the game attention every day, but also provides no real way of influencing the game play. A wrong choice can only be corrected the next day, and as the choices itself are few, there is not much to think about during the off-time.

All in all, this game makes you wonder about your own gaming behavior and your own playing style. And I truly can’t wait to see what the designer has planned for me ahead. My only concern is that it might be too linear to truly surprise me in the end. But as of now, there is no way of knowing without cheating. Something that I do not intend before I played it out myself. In the mean time, you should all try it!

Abstract:
This article proposes that computers are likely to have a major impact on our society in general, and on psychology, psychiatry, sociology and related behavioral sciences in particular. It is argued that the continuing technological improvements being made on computers and their increasingly widespread use in society is likely to affect behavioral scientists in two ways. First, they themselves will become users of computers. Second, they will be called upon to evaluate and help control how computers impact human behavior. Ways of proactively shaping such future developments are discussed. 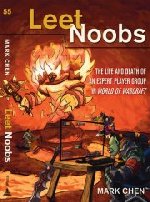 Abstract
Group expertise in socially-situated joint tasks requires successful negotiation and distribution of roles and responsibilities among group members and their material resources such that the group is a network of actors all in alignment on shared tasks. Using ethnographic methods, the author documents the life and death of a player group in the online game World of Warcraft as it engaged in a 40-person activity called raiding, which consisted of highly coordinated battles against difficult game-controlled monsters. The group took 7 months to master an in-game zone known as Molten Core, defeating all of the monsters within, including the last boss monster, Ragnaros. Part of the group’s success depended on its members’ ability to reconfigure their play spaces, enrolling third-party game modifications and external web resources into their activity. Before joining the group, the players had successfully built-up enough social and cultural capital to be recognized as expert players. Once joining the group, however, they had to relearn and adapt their expertise for this new joint task that required them to specialize, taking on different roles depending on the types of characters they chose to play, and structure themselves for efficient communication and coordination practices. They also needed to align themselves to new group goals and learn to trust each other. Thus, once-expert players became novices or noobs to relearn expert or leet gameplay, yet they were not true novices because they had a good understanding of the game system and ways to configure their individual play spaces to be successful players. Rather, they were “leet noobs” who needed to reconfigure and adapt their expertise for new norms of sociomaterial practice suited for joint venture. After 10 months, the group experienced lulls in performance due to a change in membership, and the group disbanded as members were unable to renegotiate and agree upon shared goals and responsibilities. Their network had been irreparably disrupted. Understanding how group success depends on alignment of goals and responsibilities helps us plan for future collaborative endeavors across both formal and informal settings.

Contents
Prologue: In the Fiery Depths
Introduction
–> Learning and Expertise in Games?
–> Social and Cultural Capital
–> Why World of Warcraft
–> Description of Dissertation Chapters
–> The Major Assertions of the Dissertation
–> A World of Warcraft Primer
–> Setting, Group and Data Collection
–> A Note on Stance and Positionality
Pugging the Chicken Quest
Chapter 1: Expertise in World of Warcraft Players as Distributed Sociomaterial Practice
–> Expertise Understood Through Ethnography
–> Stage One: Leveling Up
–> Stage Two: Raiding
–> Reflections on Studying Expert Practice
Role-Playing Takes So Much Time; We Could Be Killing Things Instead
Chapter 2: Communication, Coordination, and Camaraderie
–> (Computer) Game Theory
–> A Typical Night in Molten Core
—-> Gathering and Chatting
—-> Pulling, Coordinated Fighting, and Division-of-Labor Roles
—-> Making Encounters Routine by Finding Balance
—-> Welcoming Failure in Golemagg and Other Boss Fights
—-> Socially Constructed Social Dilemmas
–> An Atypical Night in Molten Core
–> Issues and Conclusion
Reflection on Chat
Chapter 3: The Enrollment of a New Actor and the Redistribution of Responsibilities
–> Introduction
–> Mangles, Networks, Assemblages, and Arrangements
–> Roles, Responsibilities, and Aggro
–> Threat Management
–> KLH Threat Meter (KTM)
–> Using KTM as a Temporary Actor that Diagnosed Problems: April 28, 2006
–> Discussion
–> Conclusion
Walt and Thoguht “Theorycrafting” Amidst a Server Shutdown
Chapter 4: The Death of a Raid
–> Changing Schedules and Changing Roster
–> The Controversial Forum Thread
–> Making Sense of the Meltdown
Victory!

Abstract:
This books deals with play and the elements of play that are inherent in all parts of our culture.

Abstract:
There has been a recent surge of novel interface devices available for home gaming systems. With the rise in popularity of games like Guitar Hero and consoles such as Nintendo’s Wii comes new opportunities for game design at the interface level. In this paper we propose three interrelated dimensions for the analysis of embodied and gestural game interface hardware devices. We demonstrate how gestural and embodied interactions can be understood as ludic, kinesthetic and narrative experiences. We ground this discussion in a close analysis of the interface affordances of the game Rock Band and demonstrate how these three dimensions allow us to understand more clearly the place of the interface in the design and the experience of games.

Abstract:
This paper discusses how authors are related to readers/players and how this is related to options in real life. Presented at the Philosophy of Computer Games conference 2007. Slides are available at http://game.unimore.it/Papers/DarioCompagno_Presentation.pdf

Content:
Introduction
Interpretation and Indeterminacy
Interactive Stories in Videogames
Has our life an interactive story?

Abstract:
This paper discusses the reality of game objects. Presented at the Philosophy of Computer Games conference 2007. Slides are available at http://game.unimore.it/Papers/J_Sageng_Presentation.pdf

Abstract:
This is a game review of The Sims (Maxis, 2000). First issue of Game Studies journal.

Content:
Introduction
Development & Psychology
Definitions, Categories, and Parameters
Are we Studying Games Yet?

Abstract:
This article tries to pinpoint/locate the most crucial and elementary qualities that set games apart from narrative and drama. First issue of Game Studies journal.

Content:
1. Introduction
2. Gaming as Configurative Practice
3. The Equipment: Situations, Events and Existents
4. Manipulation and Articulation
5. Relations and Properties
6. Example of Temporal Relations: The Phenomenology of Tetris
7. The Goals and Progression of the Game
8. Conclusion